Great news! On June 11, the San Jose City Council voted to include discussion about the long-term future of Coyote Valley in the upcoming General Plan 4-Year Review. Thanks to everyone who sent emails or came to the City Council meeting — and thanks to the entire City Council for the unanimous vote, and especially to Mayor Liccardo and Councilmembers Jimenez, Peralez and Arenas for proposing the recommendation.

Every four years, the City of San Jose undertakes a review of its General Plan, and the next 4-Year Review will begin this fall. We urged the City Council to take this opportunity to revisit the General Plan’s vision for North Coyote Valley, which has been designated for industrial development since the 1980’s.

The City Council voted to allow the 4-Year Review Task Force to discuss the long-term future of both North Coyote Valley and the Mid-Coyote Valley Urban Reserve to achieve key city objectives including the preservation of open space and wildlife habitat, flood and groundwater protection, agriculture, climate change resilience, and passive recreation. 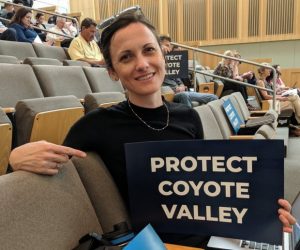 This decision marks a dramatic shift in how the City of San Jose views Coyote Valley. For decades, city plans and policies have treated Coyote Valley as a site of future development — whether for sprawling tech campuses, residential growth, or — as was contemplated at one point — a giant development the size of a whole new city, with 25,000 homes and 50,000 jobs. Even in recent years, as San Jose’s policies have increasingly reflected current understanding about the importance of concentrating new growth in infill areas and the many benefits of preserving open space, the City’s official plans for the wildlife habitat and farmland of Coyote Valley have remained tied to an outdated 1980’s vision.

The 4-Year Review process is expected to start this fall and make its final recommendations in late 2020. The Planning Commission and the City Council will review and vote on those recommendations.

We still have a long process ahead, but the City Council has taken the first step towards protection of Coyote Valley in the General Plan. Thanks to everyone for your support!

Protect Coyote Valley is an initiative of Committee for Green Foothills.